It struck me this week, that there is a striking similarity between the principles of scenario and persona development in UX design and the Italian Commedia Dell’ Arte.  In the C15th, troupes of actors would put on open air performances using stock characters.  Scenarios would be tailored to the audience and dialogue was improvised, thus allowing the actors to comment on social and political issues of interest to the particular audience.  Similarly, scenarios, personas and user journey planning are techniques used by UX designers (the actors) to generate ideas for discussion by stakeholders (the audience) of a given website.

As mentioned in my previous blog post, I am interested in understanding the process of turning analysed data into a design idea using the abovementioned techniques.  I was heartened by the thought that these techniques have been used successfully in theatre for a long time!

Our Group’s Approach To Developing Personas

Given that we had not conducted the research on the primary users yet, we decided to focus on the information gathered from the SurveyMonkey survey which had been sent out mainly to secondary users to develop personas.  The group put forward ideas and then tested them against the quantitative and qualitative data obtained from the survey.  For example, when developing the persona of a secondary user, it was evident from the research that viewing photos on the festival website would be a key activity for this secondary users.  We consequently sketched a secondary persona with a smartphone.  In the midst of generating personas, I remained mindful of the fact that the lecturer (an experienced IA and UX designer) had explained that it is a technique which she does not use as often as user journey mapping.

How Useful Are Personas?

Bowles and Box (2011) discuss how personas are used most successfully in cases where many users are interviewed to identify common themes.  They put forward ideas for making use of existing marketing data to create personas in cases where time and/or money limits research.  Our project has these constraints upon it.  The limited data we have available could, as argued by Evans (2012) result in the creation of a persona based on the group’s own rationalisations and beliefs.   This was demonstrated by the group’s initial idea to use familiar secondary users to develop primary personas due to time/resource limitations.  A reconsideration of this idea has led to research with two primary users whose behaviours, needs and goals are dissimilar to the group’s initial expectations of personas for people who attend folk festivals.

Wechsler puts the issue of personas into context by describing personas as the characters which populate a scenario.  In turn, this can be used to plot a user journey through a website.

We developed a persona for a secondary user and created a journey using different colour post-its on a whiteboard.  We took photos to record our work but then reproduced the work on slides to make the journeys easier to read.  We initially plotted the journey using the existing site.  The number of steps reflect the potential user’s difficulty in accessing relevant information:

I was impressed by the flow of this process; the incorporation of the persona into a scenario and the subsequent journey helped to stimulate questions, comments and ideas about the existing site.  Our lecturer then suggested that we plot an “ideal” journeys for the same persona.  The slide below reflects a more intuitive route through the website: 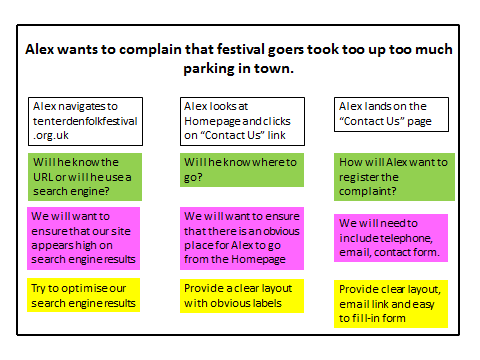 I can therefore see that focussing on personas alone could result in an inaccurate interpretation of user research.  However, I think that any inherent bias or sterotyping becomes less problematic when personas  (both primary and secondary) are seen as part of a wider UX planning process whereby the personas are put within the context of user journey maps, thus generating design ideas which span a range of user behaviours, needs and expectations.

I am looking forward to analysing the the results of the user interviews and task observations; developing primary personas will be the next step in our design process.  I hope that they can be as colourful as the personas in the Commedia Dell’Arte…